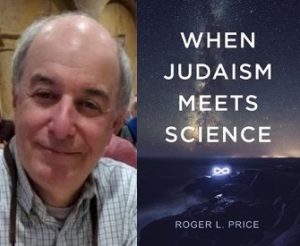 Bio:
Roger L. Price was born and raised on the South Side of Chicago, in the Hyde Park neighborhood. The area was best known as the home of the University of Chicago and the Museum of Science and Industry, as well as for its political independence. Critical thinking was the order of the day, as both common definitions and core principles were all subject to question. Equally important was that the discourse be civil.

Public grammar and high schools led to the University of Michigan, after which Price returned to Hyde Park to attend the University of Chicago Law School. Over forty years of engagement with the law included analyzing circumstances and events, identify legal issues, framing solutions, and writing persuasively and productively. In 2010, he retired as a partner with the firm of Seyfarth Shaw, LLP. Writing on Judaism and science since retirement in 2010 was a natural outgrowth of his roots in Hyde Park: no cow was too sacred for examination, nor immune to the power of empirical evidence. His first book, When Judaism Meets Science, reflects a commitment to recognizing differing viewpoints, gathering evidence, understanding the strengths and weakness of arguments, and, where possible, offering constructive proposals. The  Chapter, “A Nice Jewish Shot,” outlines the permissibility of vaccination under the religious laws of Judaism.

Mr. Price will be speaking on the following panels: